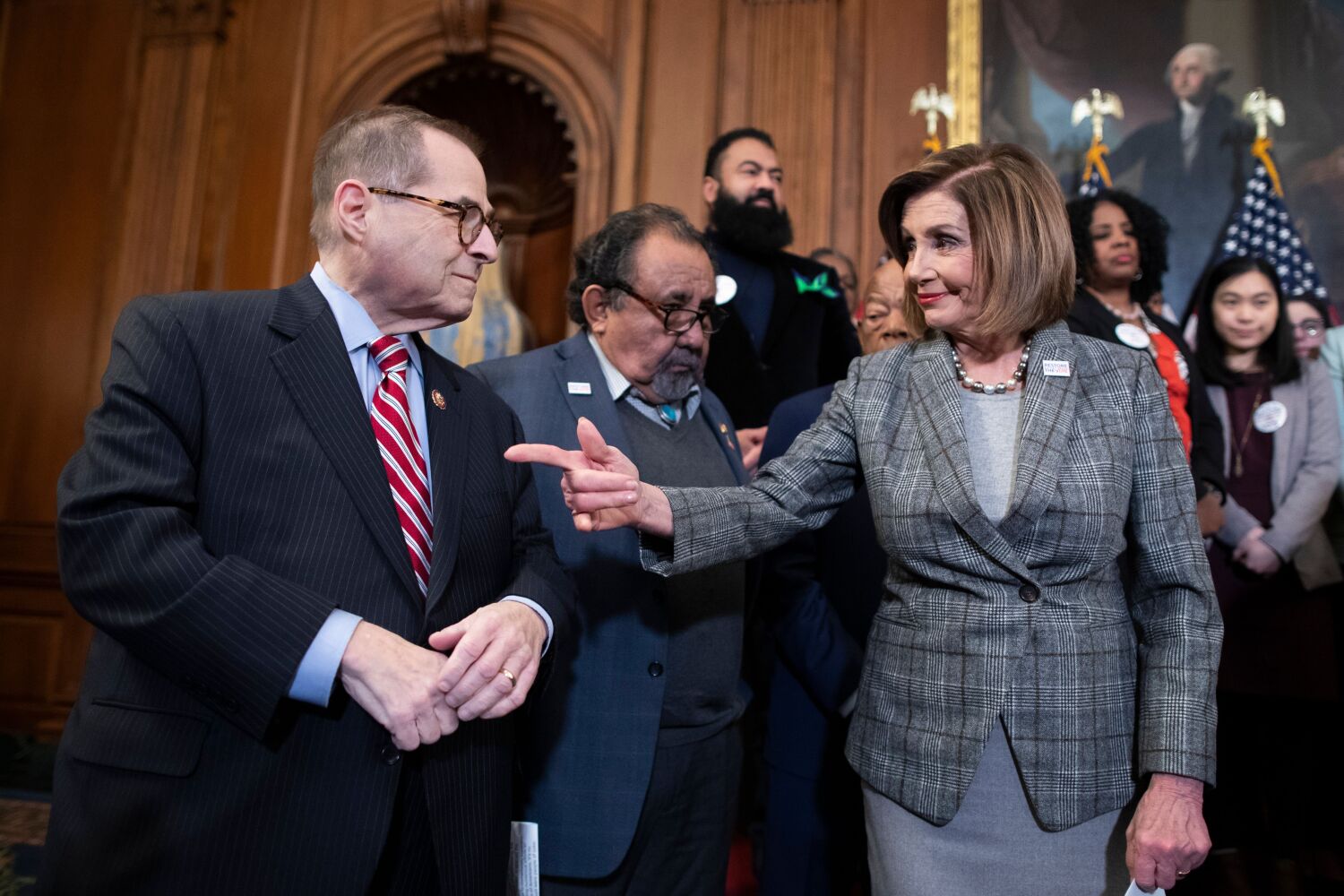 Only four months ago, the debate over whether to impeach President Trump deeply divided Democrats in Congress, pitting moderates in pro-Trump districts against progressives in liberal strongholds.

Now, with a vote on articles of impeachment expected within two weeks, the party is unified on whether Trump should be impeached. The only significant point of contention: how expansive of a case to make.

Some Democrats from conservative parts of the country aren’t thrilled with having to take a vote that could expose them to political heat. They are quietly grumbling that such a risky move would have been easier if they could have also pointed to a significant bipartisan legislative accomplishment, all but nonexistent in the divided Congress.

But even so, many predict that only a few Democrats will vote no on impeachment, perhaps as few as the two who opposed formally opening the inquiry in October.

The most substantive question splitting Democrats now is how broad the articles of impeachment should be.

Consensus has started to emerge, including among Democrats in the most conservative districts, around an article centered on abuse of power related to the president’s alleged withholding of military aid and a White House meeting while demanding that Ukraine conduct an investigation into his political rivals.

There is also expected to be a charge of obstruction of Congress for his refusal to comply with the Democrats’ investigation.

But progressives want to see broader charges against Trump, eager to hold him accountable for what they call blatant obstruction of justice during former special counsel Robert S. Mueller III’s investigation related to Russia’s interference in the 2016 election. They say the White House’s repeated attacks on the Mueller inquiry and Trump’s attempt to have him fired merit an additional obstruction of justice charge.

Moderates who were skeptical of pursuing impeachment based on the Mueller investigation view that as overreach.

“If we went about impeaching President Trump for every possible impeachable act he’s committed, I think we’d probably be here until beyond his first term,” said Rep. Tom Malinowski (D-N.J.), who represents a district that Trump won narrowly. “My advice is keep it focused, keep it simple; let’s focus on the fact pattern related to asking, demanding, pressuring Ukraine to interfere in our election — the fact pattern that’s been laid out so clearly for the American people over the last month.”

Both sides of the Democratic divide worry about possible voter backlash should they go too hard or too soft.

Speaker Nancy Pelosi of San Francisco, House Intelligence Committee Chairman Adam B. Schiff of Burbank and House Judiciary Committee Chairman Jerrold Nadler of New York are mindful of what happened to Republican House Speaker Newt Gingrich and his lieutenants when the Clinton impeachment inquiry was blamed for the loss of several Republican seats in the following election.

The prevailing political wisdom early this year — one that Pelosi appeared to be adhering to — was that impeachment would backfire on Democrats at the polls. But after the Ukraine scandal became public, moderate Democrats came around to the idea as public support for impeachment grew and Republicans were unable to inflict any real political pain on the party. To be sure, the full answer to this question is unknowable until the 2020 election. But for now, Democrats are betting the political downside is slim.

“House Democrats’ unhealthy obsession with trying to remove the president of the United States from office and undo the 2016 election will cost them their majority next year,” said Rep. Tom Emmer (R-Minn.), chairman of the House Republicans’ campaign arm.

Public polls show a stark division on the issue, with voters of each party squarely in their camps and independents almost evenly split.

But the issue may be decisive in the swing districts that will determine control of the House, such as that of Democratic Rep. Kendra Horn, who surprised pundits when she captured a conservative Oklahoma district in 2018. Trump won the district by 14 percentage points in 2016.

Forty-five percent of voters there favor impeachment, and 52% oppose it. While Trump campaign manager Brad Parscale touted the poll as bad news for the House Democratic majority, it shows that even in a Trump-leaning district, impeachment is not the political loser that Republicans had hoped it to be.

The impeachment process in the House resumes Monday when the Judiciary Committee will hear the case presented by staff attorneys in both parties. The panel is expected to reconvene later in the week for the expansive process of drafting the articles of impeachment and debating which charges should be included. The House floor vote to impeach the president is expected late the following week, sending the case to the GOP-controlled Senate, which would conduct a trial.

Once the articles are determined, Democrats will have some work to do to keep the party’s members united. Pelosi will want to keep the number of Democratic defections to a minimum.

“It wouldn’t surprise me if she lost a couple of votes, but she has a couple of votes to lose,” said Rep. Jim Himes (D-Conn.), who said he had no doubt impeachment would pass. “This is what she does. Counting votes and being operational is what the speaker does, so that’s why I give you an unequivocal, unconditional answer.”

“This is a vote of conscience,” Clyburn said Friday on CNN. “I think it would be a bit unseemly for us to go out, whipping up a vote on something like this.”

Rep. Jefferson Van Drew of New Jersey is one of two Democrats who opposed beginning the inquiry when it came to a vote in October, because he didn’t believe the evidence was strong enough to warrant removing a president. Though he is unlikely to support articles, he said he’s been surprised by the lack of pressure from Democratic leaders.

“I was ready for it. I fully expected it,” he said.

The biggest concern from moderates is that impeachment is sucking all the oxygen away from legislative accomplishments, let alone major bipartisan bills that they can tout at home.

To address that concern, the House will vote this week on a bill aimed at reducing drug prices by giving Medicare new negotiating powers, among other reforms. There is also a focus on getting final approval of the president’s proposed deal to update the North American Free Trade Agreement.

And last week the House voted on an issue with wide populist appeal: a bill designed to limit robocalls.

“It may not be like the cosmic issue that will determine the fate of the planet Earth,” Malinowski said, “but in terms of [constituents’] daily lives, it does feel that way.”

WASHINGTON — In the first major LGBTQ rights case to reach the US Supreme Court since he became a justice last year, Justice Brett Kavanaugh gave little away during arguments on Tuesday, asking only one […]

Column: To this impeachment ‘connoisseur,’ Trump’s case seems to be acquainted

In 1998, when Home Republicans got down to impeach President Invoice Clinton for mendacity about intercourse, they claimed lofty ambitions. “This must be a bipartisan train,” Rep. Henry J. Hyde of Illinois, then chairman of […]